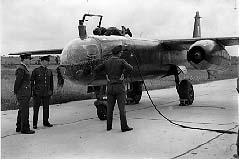 In February 1945 the first jet planes appeared over occupied Norway in the shapes of Ar 234. The airplanes belonged to Einsatzkommando 1/FAGr 5, which was then being established at Sola / Stavanger with the purpose of high altitude recconnaissance over the North Sea, Scapa Flow and Scotland. Sola was to be the only airfield in Norway used by the Ar 234. At the same time FAGr 5 changed its name to FAGr 1.The Sola unit, however, did not change its name until May when it was renamed Einsatzkommando 1/FAGr 1. The unit operated three Ar 234B-2b coded 9V+AH, 9V+BH and 9V+CH. During February and March the unit worked itself up and started operational missions. An Ar 234B-2 belonging to its sister unit 2/FAGr 5 also paid a visit to Sola at this time. During a mission on 23 March the pilot Hellmuth Hetz "lost" one engine on 9V+AH, and he had to abort his mission and return to Sola. On his inbound leg, he also "lost" the other engine , resulting in loss of height and a crash into some trees at the end of the runway. Hetz, strapped to his seat, was thrown through the cocpit and landed a considerable distance away from the wrecked airplane. Compared to the 80 % damaged airplane, Hetz was lucky to escape with a broken leg. When FAGr 5 was renamed FAGr 1 in February, another Ar 234B-2b unit also became subordinated the group. This was 1.(F)/33 which later started operations from Grove / Denmark. In April this unit performed some operational missions out of Sola / Stavanger. A third unit, 1.(F)/123, based in Germany performed a few missions via Sola in April / May.

When the german capitulation on continental Europe became effective on the 5. May, the hard pressed germans looked for geographical areas of regrouping their remaining air forces. One of few alternatives was Norway. This resulted in a massive transfer of airplanes to Norway on the 5. May. Two units operating Ar 234s were represented in this transfer, namely KG 76 and 1.(F)/123. KG 76 at this time was based at Leck / Germany with all its remaining Ar 234B-2s subordinated III/KG 76. During the early morning hours of 5. May the last 9 operational Ar 234 left Leck directly for Sola under the command of Oblt Kolm. However, three pilots experienced problems. Very bad weather with heavy rain appeared this morning and this may explain their problems. This resulted in one crashing into the North Sea, one returning to Flensburg and one returning to Leck. Thus, only 6 Ar 234B-2 from KG 76 reached Sola. At the same time 1.(F)/123 based in Germany transferred two of their Ar 234B-2b to Sola. It is possible that these two airplanes transited through Grove / Denmark on their way to Sola.

When the british and american forces arrived in Norway , the Ar 234 was a high priority intelligence target. As Norway was a part of the british occupation zone, the british forces decided on Ar 234 dispositions. An american request for 3-4 Ar 234s from Sola was granted in June, and the american colonel H.Watson arrived with a team to collect the airplanes. His team included two american pilots and one german pilot - H.Baur. Three Ar 234s were selected, and these were prepared for flights via Germany to France. From France the airplanes were later to be shipped to USA for evaluation. However on the day of the transfer flights, 3. July , one of the american pilots experienced problems just before take-off, and only two Ar 234s left Sola. The two Ar 234B-2, werk nos 140312 and 140311, were flown by Watson and Baur. 6 days later Werk no 140493 left Sola for Grove piloted by the british pilot Martindale. On 14. July this airplane reached Farnborough for further evaluation. Another two Ar 234 were also brought to USA from Europe. These two came from Grove / Denmark, but their Werk nos were not 140148 and 140343 as often has been published.

During the summer the allied forces performed evaluation and demonstration flights with the Ar 234 at Sola. The actual flying was mainly done by german pilots. During one of these flights an Ar 234 made a hard down wind landing resulting in a nose wheel collaps. This was probably werk no 140148, and the machine was written off and later scrapped in Norway. In August it was decided to prepare another four Ar 234s for transfer to Britain. On the 23. September werk nos 140356 and 140141 left Sola for Grove / Denmark. Pilots were the british pilot E.Brown and the german Miersch. One day later the same two pilots returned to Sola and left for Grove with the other two Ar 234s- werk nos 140596 and 140581. 140356, 140141 and 140581 later reached Farnborough, while 140596 ended up at Eelde in Holland where Miersch had to make an emergency landing on 3. October.

When the last two Ar 234s took-off from Sola on the 24. September, this meant the end of all Ar 234 flying in Norway. Three Ar 234s were left. In addition to the damaged 140148, another damaged Ar 234 was also present. Information and photos indicate that this machine had been deliberatly damaged on 7. May before the german capitulation in Norway. This was probably Werk no 140491. Together with 140148 it was scrapped before the british forces left Norway in November. Parts of it, mainly the engines, were left for the Norwegian Air Force for technical studies. The 10th Ar 234 at Sola was demounted, crated and shipped from Sola in October. This was probably Werk no 140343, its final destination has not been established, but it most likely ended up in Britain.

Not much remain of the Ar 234s in Norway today. A Jumo 004 engine is displayed at the Technical Museum in Oslo. Aviation Museum Sola has a Jumo 004 compressor, a Rb 50/30 camera and parts of a Walter 109-500 rocket-assisted takeoff unit. However, a complete Ar 234 coming from Sola has survived. This is Werk no 140312 which was brought to USA, and which has been restored by NASM. 140312 is also, as far as is known, the only surviving Ar 234 in the world today.

This site was prepared by Frithjof Johan Ruud and Olve Dybvig. It is a summary of a detailed story covering the Ar 234 in Norway which hopefully will be published in a not too distant future. Any information or comments to the summary are greatly appreciated at [email protected]